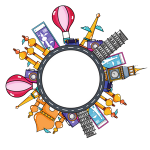 English is one of the official languages of the United Nations, the European Union and the International Olympic Committee. It is the universal language in areas such as aviation, medicine, computer science, diplomacy, sport and tourism.

English is listed as the official or co-official language of over 50 countries.

This is well over the amount of countries where the other most spoken languages are listed: 29 countries for French, 20 for Spanish and 17 for Arabic.

In addition to this extensive list of geographic areas where English is an official language, there are many other countries where it is widely spoken by a large part of the population, particularly in some European countries. While Mandarin (Chinese) is currently spoken by more people, English is now the most widespread of the world’s languages. And interestingly enough, more Chinese people are currently studying English than in any other country. An incredible 100,000 native English speakers are currently teaching in China.

5 thoughts on “Where English is spoken?”