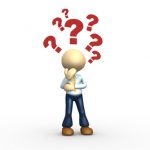 Learning English for Spanish speakers can seem quite simple at first because as much as 40% of English words have cognates in Spanish.

Cognates are words that sound similar, have similar spelling and have the same meaning in the two languages.  Examples of cognates are: teléfono-telephone; persona- person; invitar-invite.

However, there are many words called FALSE COGNATES or FALSE FRIENDS. In the case of False Friends, the English word sounds like a word in Spanish but the two words do NOT have the same meaning. Here is a list of FALSE COGNATES with translations of the words in Spanish and English: