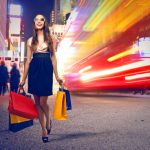 Do you like to buy certain brands of clothing, electronics or appliances because you think they guarentee quality or because they are the popular brands nowadays? Do you save up your money to buy some of the most “in style” brands of clothing or shoes thinking they will make you seem more attractive to others? Are all brands worth the money?

Neil Boorman, a British journalist, was a person who had become obsessed with acquiring  brand-name things. As a child he found that wearing the most in-style brands helped him to become popular and accepted by other kids. It all started at junior school where his peers made fun of his trainers. He wasn’t wearing Adidas, Nike or Puma at that time. So he came home one day and begged his mother to buy him some cool, new trainers- ones of the popular brands at that time. On the first day he wore these new trainers he felt more liked and approved by the other students. From then on Neil Boorman started a two decade obsession with buying brands. As a young professional he worked hard to make money, not just to live comfortably but rather to be able to buy the many expensive items that would fill his wardrobe and home. He thought these exclusive garments of clothing, shoes and electronics were the way to keep up his self-esteem. They were his identity. But this compulsive shopping was starting to cause him financial strain and debt. Little by little he realized that this obsessive consumption was not making him any happier. It was in fact making him miserable.

So what did Boorman decide to do? Something so radical that 99% of the population would never do. He decided to burn all of his brand-name things. Anything that he owned with a brand on it went into a huge bonfire in central London. Boorman then spent a year without any brands. He went to charity shops for clothing without brands and had some of his clothes made, bought food from the local markets and stalls and even made his own toothpaste. He spent the year without watching tv or dvds. This experience was extremely difficult at first but in the end it taught him that he could consume only for his basic needs rather than a mindless leisure activity. He lost weight, cleared his debts and started a much simpler life. His book Bonfire of the Brands explains his year of brandless existence.

Burning all your possessions does seem like a very drastic thing to do, and was criticized by some, but Boorman did make many people think twice about their shopping and consumption habits in this modern, competitive world.