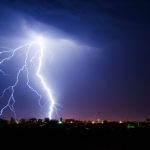 A natural disaster is a major adverse event resulting from natural processes of the Earth. A natural disaster can be devastating and can kill humans and animals, often damages or destroys homes and can leave agricultural destruction and economic damage in its wake.

Following is a list of the most common NATURAL DISASTERS on our planet:

2.  Some weather related disasters can be PREDICTED, such as hurricanes and blizzards. The technology we use for predicting tornadoes and severe thunderstorms has greatly improved in the last decades. By getting the data early, people can be warned to take shelter or make the necessary preparations.

3.   Earthquakes and floods are the DEADLIEST of all natural disasters. The Indian Ocean Earthquake and Tsunami in 2004 killed 230,000 people. The deadliest were the 1931 floods in China which killed more than 1 million people.  Some of the places around the world where earthquakes occur more often are California and Alaska in the U.S.; El Salvador, Mexico, Guatemala, Chile and Peru; Indonesia, Iran, Pakistan, Turkey, New Zealand, India and Japan, among other countries.

5.  Besides Earthquakes, there are some parts of our planet that are more SUSCEPTIBLE to certain kinds of natural disasters than others. Hurricanes are tropical cyclones and occur in the North Atlantic Ocean or the Northeast Pacific Ocean. Volcanoes occur close to major tectonic plate boundaries.

6. Some wildfires are caused by LIGHTNING, but others are caused by people´s carelessness: starting fires in the forest, throwing a cigarette on the road, etc. Wildfires occur more often in areas with severe drought and windy conditions.

7.  Most natural disasters are IMPOSSIBLE TO AVOID, but if people know what kinds of disasters are most likely where they live, they can learn what to do if a disaster happens in order to stay safe.